Energy efficiency of Victorian public hospitals has been improving since 2005-06. The energy use in hospitals is influenced by many factors. The three currently used indicators to measure energy are intensity per floor area, per occupied bed-day (bed-day) and per separation.

Bed-days and separations are used as measures of hospital activity. Occupied bed-days (also known as patient days) are the number of days or part days for all patients who were admitted for an episode of care and who underwent separation. A separation is defined as ‘the formal process by which a hospital records the completion of an episode of treatment and/or care for an admitted patient’. 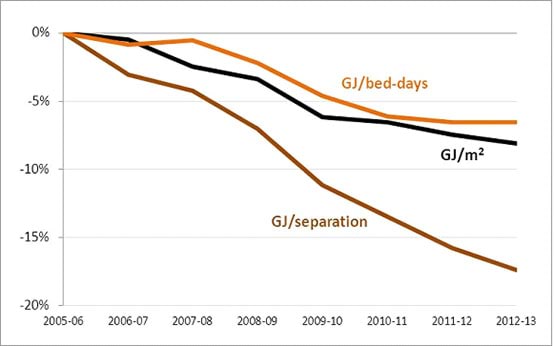 Victorian public healthcare services have been implementing energy efficiency initiatives for more than 10 years. Some of the more common initiatives include:

Examples of energy efficiency projects include:

Energy efficiency is also incorporated in capital works projects, for example, the energy-efficient cooling and heating system at Wantirna Health.

Energy performance contacting (EPC) is a contracting model, used extensively in the United States, to fund energy-efficiency and water-efficiency projects. The model uses guaranteed savings over a defined period (usually seven to eight years) to recoup the investment.

Energy efficiency benchmarks allow organisations to measure how well they are managing their energy consumption. They allow for comparisons over time and comparisons with similar organisations.

The ratio of annual energy consumption to floor area (gigajoules per square metre - GJ/m2) is the most commonly used benchmark for buildings. Analysis by the department has found that this metric is useful for monitoring year-on-year performance for an individual hospital or all public health services.

However, GJ/m2 is a poor measure for comparing energy performance between different hospitals, due to a very high variability in GJ/m2 values between similar hospitals.

Figure E4 shows notable spread in GJ/m2 values for similar hospitals. This high variability can be attributed to a wide range of factors but not necessarily to the way health services are managing their energy use.

Factors that are likely to explain this variability are whether the hospital:

Hospitals in the chart are grouped based on their service planning classification (type of health services delivered). The blue markers in the graph show the GJ/m2 values for all hospitals in the health portfolio.

The blue markers in the graph show the energy-intensity values for all hospitals in the health portfolio.

Gigajoules per square metre across hospitals

The graph shows high variability in GJ/m2 values across all types of hospitals. The graph also shows correlation between the type of hospital and the range of values; as expected GJ/m2 values are typically higher for hospitals delivering more complex services.

The National Australian Built Environment Rating System (NABERS) is a rating scheme used by organisations to manage the environmental performance of their buildings. NABERS normalises energy consumption and floor area values to account for variability not related to energy performance. This allows comparison of different buildings. For example, in a five-star NABERS-rated office building, energy is managed more efficiently than in a four-star rated office.

A specific NABERS rating program that measures the environmental performance of hospitals is not currently available but is being actively considered.