Owners and managers need to be clear on what to do, who to notify and how to undertake this notification in the case of an adverse event.

An adverse event in this context includes:

The department strongly recommends that every organisation with a cooling tower system develops and maintains an action plan to deal with adverse events. A communication plan needs to contain responses to events of varying seriousness.

HCC test results (see Section 8, 'Risk control strategies for poor water quality') indicate to those responsible for the system the extent of control over the system – in particular, the water chemistry. There is no direct correlation between HCC and Legionella concentration. For example, it is possible to have a very low HCC and still detect Legionella. Equally, it is possible to have a very high HCC but not detect Legionella. However, a high HCC (more than 200,000 CFU/mL) is an indicator that the system is moving out of control and may support Legionella growth unless action is taken to bring the system back under control. The Public Health and Wellbeing Regulations 2019 specify the action that must be taken for HCC levels above 200,000 CFU/mL (see 'Public Health and Wellbeing Regulations 2019' in Section 4).

Since HCC is not directly related to Legionnaires’ disease, it is not regarded by the department as having the same public health significance as the detection of the disease-causing Legionella bacteria.

Detecting Legionella in the recirculating water of a cooling tower system has public health implications. Consequently, the Public Health and Wellbeing Regulations 2019 require a response within 24 hours, including disinfection of the system, and resampling and testing for Legionella 2–7 days later.

Being advised by the department that a case of Legionnaires’ disease is possibly associated with the site must trigger a range of responses, including following the advice of the department in relation to treatment of the cooling tower system on-site.

A communication plan should consider the responses to each of the adverse events listed above, and describe in detail who will be informed, how they will be informed and what the message will be.

The department strongly recommends that communication plans be developed in an open and participative manner that involves key stakeholders and particularly staff. This can best be done using existing structures such as an occupational health and safety committee.

In deciding who will be advised of an adverse event, the following issues should be considered.

However, where a cooling tower system has been tested and Legionella has been detected, the potential for the system to cause Legionnaires’ disease also needs to be considered.

Minimising the adverse impact on the business

Experience with major outbreaks of Legionnaires’ disease has shown that linking cases of the disease with particular premises can have a major impact on the business concerned. Immediate and appropriate action is essential, combined with adequate disclosure at appropriate times. Early diagnosis and treatment of people exposed to Legionella could enable them to minimise the impact of the disease and could limit the impact on the business.

This approach must be carefully balanced with the need to avoid causing undue anxiety for those involved.

The potential for serious health effects from Legionnaires’ disease needs to be considered when deciding who to notify if Legionella is detected. Considerations include whether the tower system is in, or close to, an acute health or aged residential care facility, or whether other susceptible groups have been exposed to aerosols from the system. This could influence the decision on who and how to notify at an early stage. Notification will allow those potentially exposed to monitor their health and seek medical advice if they show symptoms.

The role of workplace health surveillance

Workplace surveillance to identify staff absent because of ill health (particularly with flu-like symptoms) immediately after Legionella has been detected in a cooling tower system can form part of a communication plan. Once identified, the worker concerned may be contacted and, in some cases, advised to bring the matter to the attention of their medical practitioner. Workplace surveillance may be recommended by the department under some circumstances, such as the possible linking of the site with a case of Legionnaires’ disease.

Many organisations that have had a positive Legionella test in a cooling tower system have been reluctant to notify their stakeholders of the result. This is generally because they are unsure of the potential reaction. The workforce or others may be alarmed and want to know what action has been, and will be, taken.

Owners and managers may wish to consider adopting a standard preventive disinfection procedure in which the water of the system is disinfected immediately after the sample is taken12. This is a conservative practice, but addresses problems associated with the 10-day time lag between testing and receiving the test results. In the event of a positive test result, staff and others can be advised that the Public Health and Wellbeing Regulations 2019 have been followed by disinfection of the system, a review of cooling tower–related programs, correction of any faults and retesting 2–7 days later. In this way, the information about a positive result for Legionella can be accompanied by details of the preventive action already taken to disinfect the system, as well as action being taken after the positive test.

Who to inform if Legionella is detected?

The information must also be communicated to those with responsibility for the cooling tower system, including the water treatment provider.

Other people who should also be considered for notification are:

The policy on how and what will be communicated about the problem and the action to be taken needs to be considered. The flow of information in such a situation is summarised in Figure 11. It is not uncommon for industry to have complex management relationships in place on a site. 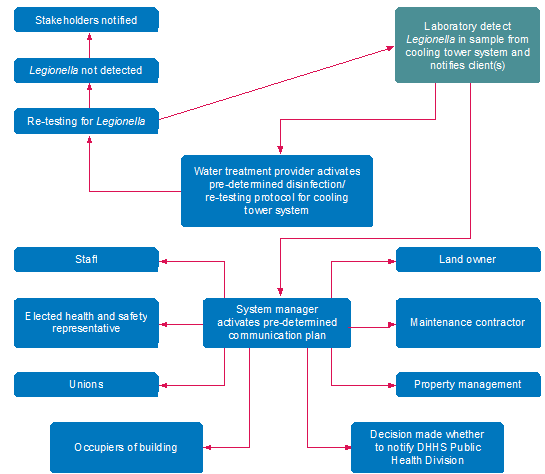 Action plans will vary from site to site. Appendix 8 provides a model procedure for cooling tower systems in which Legionella is detected. Such an education program should ideally occur before an adverse event. It should include basic information about where the cooling tower systems are located, what is done to manage the risks of Legionnaires’ disease and what procedures are in place to deal with the detection of Legionella.

Who to inform if high HCC is detected?

Some organisations are opting to use a totally transparent approach and inform all stakeholders of all bacterial test results. The department considers as a minimum that a high HCC result (more than 200,000 CFU/mL) should be communicated to:

The Public Health and Wellbeing Regulations 2019 require that, if Legionella is detected in three consecutive water samples taken from the same system, the responsible person (who owns, manages or controls the cooling tower system) must notify the department of the detection of the bacteria immediately by telephone, followed by a written notification within 3 days of the third detection of the organism.

If consecutive adverse results are obtained – such as high HCC levels or the detection of Legionella – it is suggested that the RMP be independently reviewed to attempt to identify any weaknesses in the system that can be improved to reduce the overall level of risk.

12. A cooling tower system is disinfected by dosing the water of the system with:

a) a chlorine-based compound, equivalent to at least 10 mg/L of free chlorine for at least an hour, while maintaining the pH of the water between 7.0 and 7.6, or

b) a bromine-based compound, equivalent to at least 20 mg/L of free bromine for at least an hour, while maintaining the pH of the water between 7.0 and 8.5.

13. This is a mandatory action under the circumstances described in 'Notifying the department'.