During the normal operation of a cooling tower, aerosols are formed and then carried into the environment through the tower exhaust. If Legionella bacteria are present in the water of the cooling tower system, breathing these aerosols can result in infection.

Cooling tower systems are normally associated with air-conditioning systems, refrigeration systems and industrial processes. The basic function of the system is to remove heat (see Figure 4). Cooling tower systems temporarily store water, which is usually recirculated, in a basin. The water is sprayed or dripped into a large chamber. Air is forced through this chamber by a thermostatically controlled fan.

Discharges from cooling towers are normally warm and humid; sometimes steam can be observed as condensation. 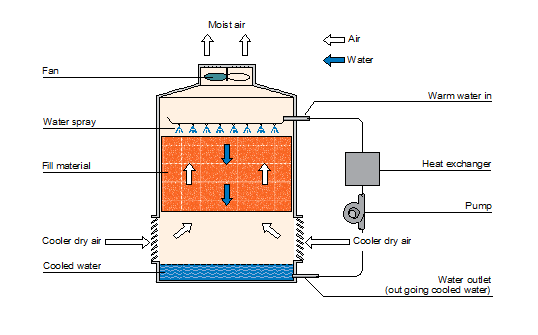 Figure 4: Mechanism of heat exchange in a cooling tower

The typical layout of air-conditioning systems that use cooling towers is shown in Figure 5. These cooling towers contain fill material inside the tower. Usually made of plastic, this material allows the falling water to spread over a greater area, which increases the surface area of the water to be cooled and allows more effective cooling. 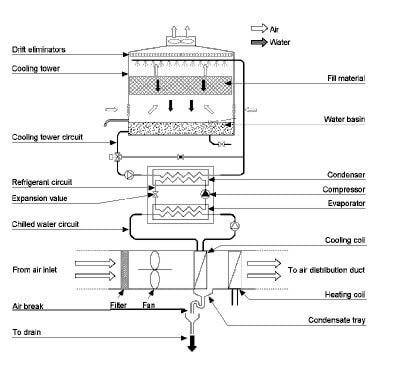 Industrial processes often have a device called an evaporative condenser to eject heat from the process. These units work in a similar manner to cooling towers. The cooled water is distributed over a series of pipes that contain circulating refrigerants or other fluids. Unlike cooling towers, evaporative condensers do not contain any fill material. These systems also present risks for Legionnaires’ disease and fall within the definition of ‘cooling tower’ used in the Public Health and Wellbeing Act 2008 and the Public Health and Wellbeing Regulations 2019.

The design of a typical evaporative condenser is shown in Figure 6. Evaporative cooler: These units have not been linked to cases of Legionnaires’ disease

There has been no evidence linking evaporative coolers or evaporative air-conditioners to cases of Legionnaires’ disease.

Cooling towers may be found on rooftops; in plant rooms, basements and mezzanines; and at ground level. There are four types of cooling tower, which are described in the following sections.

Induced draught counter-flow towers are very common. They can be identified by the fan at the top of the tower. The fan pulls air up through the tower in the opposite direction to which the water is falling. The air usually enters the tower through inlet louvres on the sides of the tower. Water is usually delivered by means of fixed or rotating spray arms. Drift eliminators are usually placed above the sprays to prevent loss of water through drift.

Figure 7 shows a schematic of these types of cooling towers. In an induced draught cross-flow cooling tower, the fan is also mounted on the top. However, the fan draws (induces) the air across the water falling from the top of the tower to the basin.

Figure 8 shows a schematic of these types of cooling towers.

In a forced draught counter-flow cooling tower, the fan is located at the air inlet just above the basin. Air is forced vertically through the tower fill in the opposite direction to the water flow. The air is forced out through the top of the tower.

Figure 9 shows a schematic of these types of cooling towers.

In a forced draught cross-flow cooling tower, the fan is mounted on one side and pushes the air in a cross-flow manner past the falling water.

Figure 10 shows a schematic of these types of cooling towers.

Legionella outbreaks – why they happen

Cases of Legionnaires’ disease associated with a cooling tower system usually occur when a number of conditions are met. First, Legionella enters the cooling tower system, presumably from the water supply. The bacteria then multiply as a result of one or more of the following scenarios:

The final step in the outbreak pathway is exposure of susceptible people to the Legionella-contaminated droplets generated by the cooling tower system. This is often associated with favourable weather conditions, such as warm and windless days that typically occur in autumn in Victoria.

The development of a Risk Management Plan (RMP) that considers all these factors can be very complex, so we have identified the following five most critical risks associated with outbreaks of Legionnaires’ disease from cooling tower systems:

There is no prescribed format for a RMP. A template is provided in Appendix 1, This template is intended only as a general guide to the development of RMPs for cooling tower systems.

The Public Health and Wellbeing Act 2008 requires that the RMP be independently audited  by an approved auditor. The aim of the audit is to confirm that the RMP addresses the critical risks prescribed in the Public Health and Wellbeing Regulations 2019. Addressing these risks will significantly reduce the likelihood of the cooling tower system contributing to an outbreak of Legionnaires’ disease.

The Public Health and Wellbeing Regulations 2019 describe the risks associated with stagnant water as the lack of water recirculation in the system, and the presence of dead-end pipework and other fittings in a cooling tower system. Dead-end pipework is sometimes known as ‘dead legs’.

Stagnant water is a risk because:

The way that a cooling tower system is used is significant. The start-up time for a cooling tower is a critical period and must be handled well to prevent problems occurring. Well-maintained cooling tower systems that are in use for most of the year are generally of lower risk than those that remain idle for more than a month. This is because the biofilm is readily disturbed when operations stop and start.

If the system’s circulation is shut down for a month or more, the water may become stagnant. The risk of problems when the system is next turned on increases significantly because Legionella may have grown in the stagnant conditions, if the biocide has not reached all parts of the system.

The lack of a recirculating pump controlled by a timer to circulate water through the system at times when the tower is not in use can be a key contributor to stagnant water.

Similarly, if a tower system has dead legs, even with a high-quality maintenance program it may not be possible to consistently meet the desired standards. This is often because a biocide may not reach all extremities of the system, allowing Legionella to grow and potentially regularly reinfect the system.

According to the Public Health and Wellbeing Regulations 2019, nutrient growth risks include:

The amount of nutrients in the water needs to be controlled because it has a significant effect on the ability of bacteria to grow rapidly. The more nutrients are in the water, the more ‘food’ there is for bacteria. Hiding out: Legionella bacterium being engulfed by an amoeba

Algae, biofilm, protozoa and corrosion all can conceal and protect Legionella from biocides in the water, increasing the risk posed by the cooling tower system.

The control of biofilm is fundamental to minimising risks from Legionella in a cooling tower system. Biofilm can form on any of the wetted surfaces of the cooling tower system. Legionella bacteria are relatively easily killed by moderate concentrations of many biocides, provided that the bacteria are free-floating in the water and exposed to the biocide. However, Legionella has adapted to survive under adverse conditions, and has the ability to live and multiply within protozoans. These engulf the Legionella bacteria, which continue to grow and multiply inside the larger organism. Protozoa can resist much higher concentrations of biocides than Legionella, and the Legionella can survive inside the protozoa, particularly when the larger organism has become part of the biofilm typically found on the inside of pipes and other wetted surfaces. The biofilm may peel away from the pipe surface for a range of reasons, including physical disturbance. This can result in release of Legionella bacteria into the recirculating water and their discharge out of the tower within water aerosols before they can be killed by biocide.

Biodispersants, which are low-foaming detergents, are used to break down biofilm. Systems in which biodispersants are not present are at significantly higher risk of nutrient growth and biofilm formation.

Corrosion is also a risk factor, because any corrosion in the system may release iron, which is a growth factor for Legionella. Internal surfaces of a cooling tower system may become heavily corroded unless anticorrosion chemicals are used and corrosion levels are monitored carefully.

The temperature of the recirculating water can affect nutrient growth. It is impossible to eliminate bacteria from a cooling tower system, and water temperature will be a factor in bacterial growth rates.

Systems that do not have a comprehensive water treatment program or are not monitored for bacterial levels are significantly more likely to have poor water quality.

Deficiencies in the cooling tower system

A cooling tower system that is poorly designed or maintained is a risk because:

The physical design, maintenance and operating performance of the tower and related system can have a significant impact on the potential risk of Legionella transmission. If the system is undersized and water temperature is too high, the potential for rapid bacterial growth is greater. System size is important because towers with low water volume will have a high water turnover, and the biocide is less likely to be effective. The choice and concentration of biocide need to be matched to the water volume.

The risk of aerosol distribution is much greater without design modifications such as fitting of an effective drift eliminator.

The location of, and public access to, cooling towers cover two risk factors:

A poorly located tower can be subject to environmental contamination – for example, from building sites; this can increase the level of nutrients and thus the number of bacteria, including Legionella. In addition, if a cooling tower system is located in an area where large numbers of people have access, this can be a problem if the system becomes contaminated with Legionella because all of these people will be potentially exposed; if the people exposed to the tower are from a susceptible group, the risk will be higher.

The extent to which people are exposed to aerosols is an important factor when assessing the risks associated with a cooling tower system. Steps involved in this assessment are as follows:

Our phone service is available Monday to Friday, from 9:00am to 1:00pm.