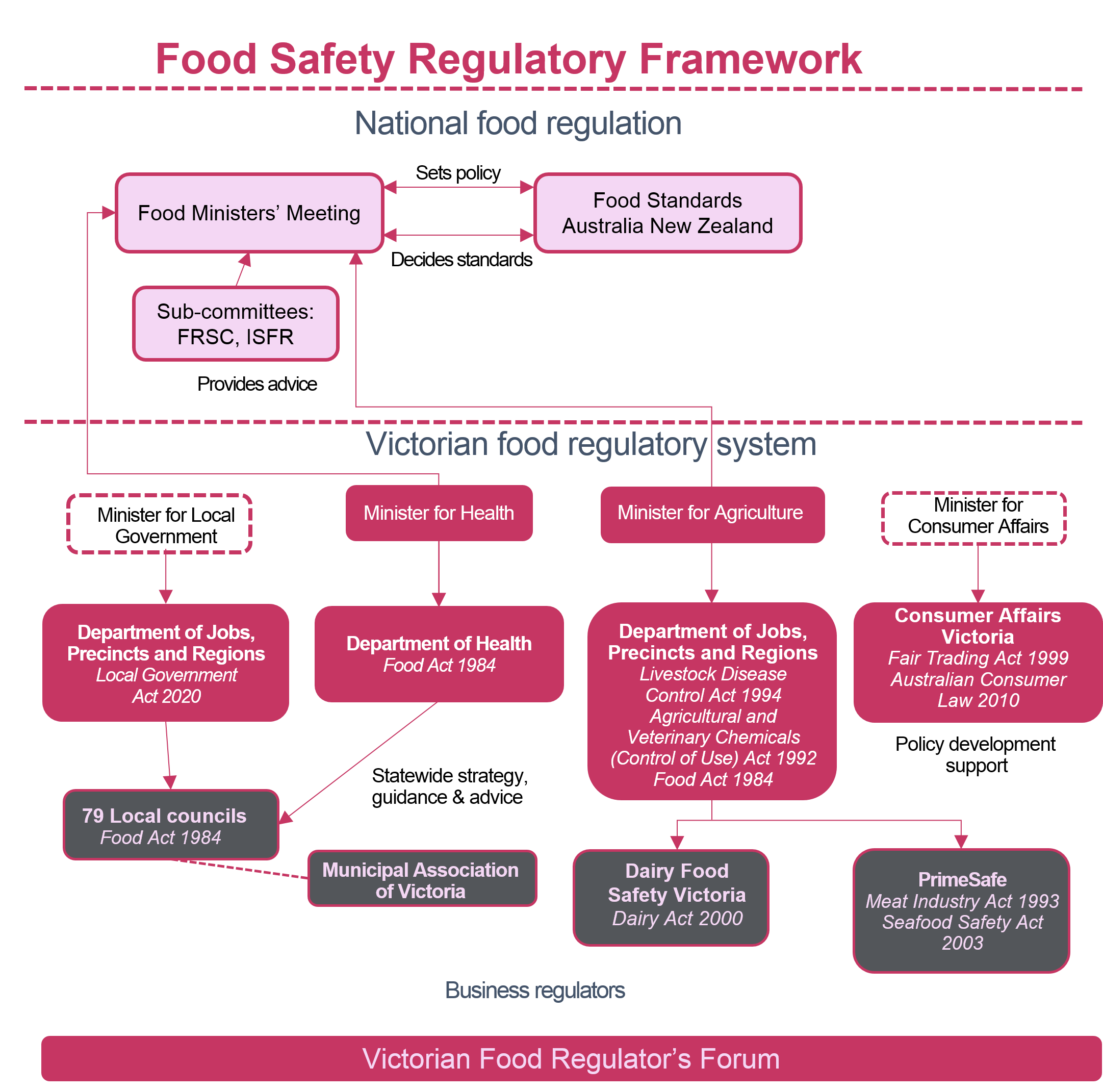 An Intergovernmental Agreement between commonwealth, state and territory governments underpins the food regulatory system in Australia. The system involves all three levels of Australian governments and New Zealand. Under the system, Australian states and territories administer their own food acts, which are based on a national model and incorporate national food standards automatically as laws in their jurisdictions.

The Intergovernmental Agreement aims to provide a national system of safe food controls. Its purpose is to:

In addition to the Intergovernmental Agreement, an Australia New Zealand Food Treaty is in place between the Australian and New Zealand governments. The Treaty seeks to:

Food Standards Australia New Zealand (FSANZ) is an independent statutory authority that is managed by a board, whose members are appointed by the Commonwealth Minister for Health, in consultation with the Australia New Zealand Ministerial Meeting on Food Regulation. In addition to developing all domestic food standards, the role of FSANZ extends to matters such as coordinating national food surveillance and food recall systems, working with international agencies responsible for food regulation, and developing codes of conduct and guidance materials for the food industry.

The Food Ministers' Meeting oversees food safety in Australia and New Zealand. It is responsible for developing food regulatory policy and guidelines and for promoting a consistent approach to food standards compliance and enforcement. This responsibility requires that all members balance public health and safety objectives with the need to produce and deliver food to the public efficiently and with minimal regulation.

The Food Ministers' Meeting is supported by the Food Regulation Standing Committee (FRSC) whose role is to coordinate policy advice and ensure a nationally consistent approach to the implementation and enforcement of food standards. The FRSC comprises senior officials of the departments for which the ministers represented on the Forum have portfolio responsibility.

The Implementation Sub-Committee for Food Regulation (ISFR) reports to the FRSC and oversees a consistent approach to implementing and enforcing food regulation and standards.

For more information about FSANZ and its subcommittees, go to the FSANZ website.

The development of food standards, reviews of existing standards and variations to those standards, stem from applications made to FSANZ, from proposals of FSANZ’s own initiative, or in response to a request made by the Food Ministers' Meeting.

Public consultation is an important part of the food standards development process and FSANZ encourages written comments from interested individuals and organisations about applications and proposals. These comments, which can relate to issues such as regulatory impact, safety and risk assessment and technical matters, assist FSANZ to assess applications and proposals.

The department coordinates whole-of-Victorian government input into this process, drawing upon in-house expertise in food microbiology, food technology, toxicology, chemistry, nutrition and dietetics, as well as expertise that exists within the Department of Environment, Land, Water and Planning and its agencies PrimeSafe and Dairy Food Safety Victoria, and other state government departments and agencies.

New or amended food standards are approved by the FSANZ Board and then submitted to the Food Ministers' Meeting for its consideration. The members can ask the FSANZ Board to review its decision to approve a standard or variation to a standard. FSANZ publishes the standard in the Commonwealth Government Gazette and registers it as a law, which is then automatically adopted by reference, and without amendment, into Australian state and territory food laws.

Information on standards development and the Code can be found on the FSANZ website.