Rats and mice are just two of the mammals that belong to the order Rodentia. More than 2,200 species of rodents – such as mice and rats – exist, and more than 40 per cent of all mammal species belonging to the Rodentia order.

Rodents have been successful in populating every continent except Antarctica. This is because of their small size, short breeding cycle and ability to eat a variety of foods. They are the second most successful mammal on the planet, coming second only to humans.

Rodents consume and destroy their food source during feeding. This can cause devastating damage to a wide range of different settings, such as domestic households, commercial businesses, farms, manufactures and livestock.

Not only do rodents gnaw through many materials, but they can also ruin food supplies by excreting on them.

Not all rodents are considered pests. Many rodents are an important part of the food chain, as they are prey for meat-eating animals such as cats, snakes, large birds and foxes. Rodents are also important ecologically for spreading seeds and spores.

Rodents are characterised by their two sharp front teeth in the upper and lower jaws. These teeth grow continually, and their size is controlled by continual gnawing.

The Norway rat, also known as the common rat, sewer rat or brown rat, is the larger of the two pest rats.

Their life span is usually between 9 and 12 months.

Females can have 5-6 litters per year, and average 8-10 pups per litter. The gestation period is 21 days and the young reach sexual maturity at 3-4 months.

Norway rats are usually active at night. They are good swimmers and diggers and can communicate through high pitched vocalisation.

The Norway rat is an omnivore, and will eat both plants and animal matter. They will eat almost anything, although they prefer starch and protein-rich food, such as cereals, which form a substantial part of their diet. Other foods they eat include meat, fish, vegetables, weeds, earthworms, crustaceans, nuts and fruit. 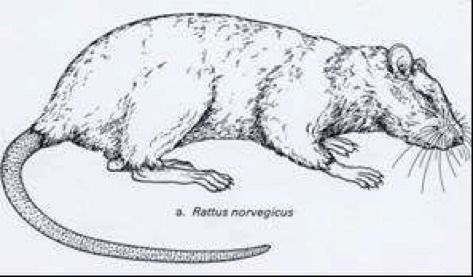 The Norway rat is characterised physically by their:

The roof rat, also known as the ship rat or black rat, is smaller than the common Norway rat. Their life span is usually 9-12 months. Females can have 4-5 litters per year, and average 6-8 pups per litter. Sexual maturity is reached at 3-4 months and females have a gestation period of 21 days.

Roof rats are usually found in built-up areas or near the coast. They have good climbing ability and can nest in buildings, roof voids and ships.

Roof rats eat a wide variety of food items, and generally feed on cereals, grains, fruit, and almost any item that has nutritional value. They are omnivores and will feed on insects or meat if necessary.

The roof rat is characterised physically by their:

The house mouse is small. They have a life span of approximately 12 months. Females can have 6-10 litters per year. Sexual maturity is reached at about 6 weeks, with a gestational period of 3 weeks.

House mice are curious animals and can live indoors or outdoors in close proximity to humans.

They have a wide and varied diet including fruits, nuts, grains, animal feed and cereals.

The house mouse is characterised physically by their:

Inspect the premises carefully and look out for signs of damage caused by gnawing or feeding, holes, smears and droppings. Mice tend to feed by nibbling, eating the outside of grains and leaving the core. However, rats will often leave crumbs or smaller pieces of food.

House mice tend to live inside the building and will gnaw holes up to 20 mm in diameter in walls, partitions and floors. Holes made by rats will be larger, approximately 80 mm, and may be the entrance to nests. Nests may be found in hidden areas and can be made up of a wide range of materials such as cardboard, paper, straw and rags.

When looking at ways to prevent and control a rodent problem, always assess the area for possible sources of food, water and shelter. Good ways to discourage rodents from inhabiting an area include:

Mice are able to squeeze into gaps as small as 8 mm, so make sure even small gaps or holes are filled.

Situations where trapping of rodents may be the most viable option include:

Glue traps can only be used by licensed PCOs in food manufacturing businesses in accordance with the Prevention of Cruelty to Animals Regulations 2008.

Rat and mice infestations are commonly controlled using rodenticides. Rodenticides can kill the rodent with a single dose (acute) or through multiple doses (chronic).

by the target animal, the pesticide reacts with stomach acid in the digestive system to produce a toxic phosphide gas – aluminium, magnesium and calcium)

Metal phosphides are usually fumigants and are fast-acting, single-dose rodenticides.

Norbormide is only effective against the common rat. It acts by disrupting the blood supply to vital organs by constricting blood vessels.

Broadifacoum, flocoumafen and difenacoum are all highly lethal anticoagulant poisons. Anticoagulants stop blood from clotting causing it to become thin. This results in the rodents dying of internal haemorrhage.

Warfarin, coumatetralyl and diphacinone are anticoagulants. Calciferol is a form of vitamin D used in combination with anticoagulants to improve their rodenticidal effects.

Phone hours are: 9 am to 1 pm, Monday to Friday. Direct all other enquiries to the pest control email address.