The digestive system of termites contains a variety of microorganisms to assist in the digestion of the plant fibre cellulose.

Termites are often wrongly called ‘white ants’. This term should not be used because termites are neither white nor ants.

Termites live and work together in nests or colonies. Members of the colony take different forms or ‘castes’. These include:

Alates, meaning ‘winged ones’, are the true adult termites.

They have eyes, wings, darker colouring and are fertile.

Their wings are equal size and shape and twice the length of their body. They shed after the colonising flight is made. Shed wings are a good indication of termite presence.

These are the sexual forms of the colony including future kings and queens of colonies yet to be established.

The reproductive’s live in a central chamber in the nest where a female, or ‘queen’, will lay many thousands of eggs each year over her life span of approximately 10 years. Male, or ‘kings’, are responsible for fertilising the queens. Multiple reproductives are commonly observed.

The young termites develop in the colony by shedding cuticles at the end of each growth stage, gradually changing until they reach the worker, soldier or adult (winged form). If queens die, some supplementary reproductives may carry on the colony as neotenics.

Reproductives are generally darker than workers and soldiers. They have functional eyes and their more robust skin (cuticle) is able to resist the outside environment. After flight, unlike other insects, the deciduous wings of termites are discarded and piles of shed wings are a good clue to termite infestations.

Soldiers have darker, larger heads than the other castes. They are blind, wingless, and have undeveloped reproductive organs.

Soldiers are tougher than the other castes and take longer to die from most toxins, exposure, or starvation. It is their role to defend the colony, if disturbed, while the damage is repaired by the workers.

Soldiers exist in different forms. Most species have soldiers, with well-developed jaws (mandibles) used to crush attackers, such as ants.

Nastute soldiers occur in Nasustitermes species and are only rarely found as pests in Victoria. They have a snout from which they eject a sticky solution which irritates and glues attackers.

Phragmotic soldiers have a very large head, which can be wedged in tunnels to block attackers. The drywood termites, which use this strategy, are only occasional introductions to Victoria.

The workers account for the largest number of termites within the colony, and are therefore responsible for the most damage.

They gather food, groom other termites, construct tunnels and repair damage in addition to tending to the kings, queens and their young. These termites are believed to work 24 hours a day throughout their 4-year life span. Worker termites are generally unpigmented. They are blind, wingless and have undeveloped reproductive organs.

Termites hatch from eggs that have been tended by their nest mates in specially constructed nurseries.

As soon as they are old enough, the young work within the colony where jobs change with age and maturity.

Once a single colony becomes sufficiently large it produces winged reproductives which wait in specially constructed chambers until ready to leave the nest and undertake a colonising flight.

They leave the nest as a swarm under conditions of high humidity, still air, and sometimes low light. Termites are not strong fliers and usually only fly up to 1km, although breezes and updrafts can carry them a lot further.

Upon landing near a suitable nest site, the female sheds her wings and emits a calling scent. Males quickly respond.

They dig in and over the next few weeks, mate and take care of their young until enough workers develop to take over the care roles.

New colonies are sometimes established via budding. This is believed to occur when the extremities of the colony lose contact and become independent. 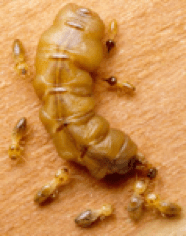 The primary king and queen are believed to emit hormones, which suppress the sexual development of the rest of the colony. However, this control breaks down if the territory is too large or contact with groups is lost.

Termites work together in nests or colonies. They hatch from eggs as larvae, which are fed by adult termites. They then develop into four forms or ‘castes’ of termite:

The temperature, food quality, and activity of the colony will determine how long it takes for a termite to develop from egg to adult.

Nests and tunnels are kept moist because worker termites cannot stand low humidity for long periods of time. The temperature within the nursery of a large nest ranges between 10 °C and 35 °C but rarely varies more than one degree a day. The relative humidity is approximately 100 per cent. The moisture required to maintain the temperature and humidity is obtained from the soil, leaking plumbing or decaying timber.

It is important to correctly identify the type of pest termite before beginning treatment. This will help you understand the habits of the colony, locate the nest and indicate the most appropriate method of control.

Termite species are best identified by their soldier termites, which has the most prominent features.

These termites are widely distributed throughout Victoria, and are responsible for more than 80 per cent of termite damage to buildings. 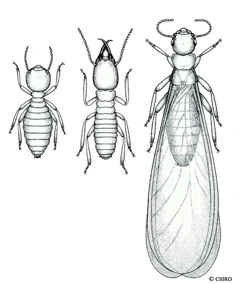 Coptotermes’ soldiers have brown, saber-like jaws. They measure 3.5–6.5 mm in length. When disturbed, these soldiers eject a white, rubbery glue-like substance from their pear-shaped heads.

A colony of Coptotermes typically includes half a million termites, but may include up to 1 million.

These termites travel at least 50 metres from the colony via a series of underground tunnels to find food. Coptotermes acinaciformis send large numbers to new food sources and, therefore, respond strongly to bait. In contrast, Coptotermes frenchi explore widely for new food sources and feed lightly at multiple points. They respond less strongly to bait.

Nasutitermes are found throughout Australia; however, the species are less problematic in Victoria.

Nasutitermes exitiosus is common north of the Great Dividing Range. They construct dark, thin-walled mound nests between 30 cm and 75 cm above ground. These mounds are up to 1m in diameter.

This is Victoria’s largest species of termite, sometimes called dampwood termite. They are usually found nesting in large pieces of timber (particularly older trees) and are most common in wet, mountainous areas. They may, however, also be found in the dry foothills of Melbourne.

These termites are found throughout Australia, but only in the north of Victoria.

A mature colony of Schedorhinotermes will have two distinct sizes of soldiers, referred to as ‘major’ and ‘minor’ soldiers. Major soldiers grow up to 5.6 mm long, while minor soldiers are only 3.6 mm long. Both types of soldier have mandibles.

Schedorhinotermes are destructive and relatively nomadic, rather than maintaining a fixed, central nest.

Heterotermes are widely distributed throughout Australia. However, they are only a major pest species in the Northern Territory.

The soldiers of this species are up to 4.75 mm long, with lengthy, dark jaws and parallel-sided heads.

Heterotermes live in small colonies that attack fence posts, timber flooring, and paling fences within a small radius of the nest. They are commonly found because they feed on small timbers on the soil surface.

It is preferable to control colonies before installing physical barriers.

Dusts work to control termites because they ingest and distribute the insecticide among the colony during habitual grooming.

Insect growth-regulator dusts (such as Triflumuron) and non-repellent termiticides are the safest methods of termite dust control for the human consumer.

Arsenic trioxide dust has been used since the 1930s to control termites, often with the addition of ferric oxide or another colourant. However, arsenic trioxide is a poisonous, highly toxic elemental pesticide that does not degrade.

Baiting is often the best way to kill an attacking colony when the main nest site cannot be found. Bait stations also allow you to collect samples of termites for species identification.

Bait stations consist of containers of cellulose materials such as timber, paper or cellulose gel which are either buried in the ground near the building under attack or carefully placed inside near known damage.

Bait generally use slow-acting, non-detectable toxins so that the nearly whole colony can be poisoned before adverse effects appear. Repellent termiticide formulations such as those of pyrethroids are not as colony control agents. Care must be taken not to cross contaminate baits with even tiny residues of other pesticides.

Baiting does not provide a useful barrier. The baits do not isolate the building as termites are still able to access the structure. For long-term structural protection, barriers are preferred.

This method tries to isolate the termite colony from the building being attacked.

Chemical barriers work by applying an unbroken boundary of pesticide around the exterior of an infested structure. This creates a zone or band of toxic soil that the termites cannot cross. Creating an effective chemical barrier may involve trenching around the foundations of the structure, and injecting the chemical into the soil through holes drilled in concrete foundations.

Termites work through the treated soil unaware that they are picking up a toxic chemical. This greatly reduces the termite population and may destroy the colony.

Repellent chemicals, such as Bifenthrin, are commonly used as barriers. Non-repellent termiticides, such as Imidacloprid and Fipronil, may be more resilient where coverage is uncertain (for example, where the chemical is injected through concrete).

Soil may also be treated with a chemical barrier prior to building construction. Bifenthrin is commonly used for this purpose; Imidacloprid is often used for the exposed perimeter of a new structure.

Physical barriers are the least-toxic method of termite control for new buildings.

This method isolates the termite colony from a building by creating a complete barrier around or beneath a building’s foundations that termites cannot cross.

Physical barriers can be made of a variety of materials, including:

Risk of termite attack to timbers may be reduced by controlling moisture, using resistant timbers (see below) beneath floor level, avoiding contact between timber and ground or using non-timber elements in construction (for example, concrete masonry and steel). However, it is notable that research from the Australian Commonwealth Scientific and Industrial Research Organisation (CSIRO) has shown that rates of termite attack are not related to building frame type; steel-framed homes are also attacked because termites find other food sources inside.

Certain species of timber, such as Red gum and White cypress pine, are naturally resistant to termite attack. However, all timber cut from a resistant species will not be equally resistant. Accordingly, these timbers may be used in ground contact or for sub-floor framing, but strip shielding or alike should still be used to prevent termites reaching the structure above.

Timber treated with copper, chromium and arsenic (CCA) is listed as a restricted chemical product by the Australian Pesticide and Veterinary Medicines Authority (APVMA). This restricts the purchase and use the product, and the areas where it can be used.

Other effective, non-restricted treatments, especially quaternary ammonium compounds, are gradually replacing the arsenic components and have a similar green appearance.

Termites require food (wood) and water keep the humidity within their nests high, and thus, their colony alive. Homeowners can help prevent termite attack by removing these needs.

Pest control operators should suggest ways to do this, such as:

The department would like to acknowledge the assistance and advice of Don Ewart in the production of this information.

Phone hours are: 9 am to 1 pm, Monday to Friday. Direct all other enquiries to the pest control email address.