Hepatitis C has been a significant public health concern in Australia and Victoria for nearly three decades. Increasing numbers of Victorians have been living with hepatitis C, estimated to be more than 48,000 at the end of 2016 (Kirby Institute for Infection and Immunity in Society 2017).

Liver cancer, for which hepatitis C is the leading cause, is increasingly common in Victoria (Council Victoria 2018).

This virus is present in the blood of a person living with hepatitis C and can be spread through blood-to-blood contact. It is commonly spread through sharing unsterile needles, syringes and other injecting drug equipment.

There is a higher prevalence of hepatitis C among key populations such as people who inject drugs, people in custodial settings (prisons), people from high-prevalence countries (where hepatitis C is often acquired through use of unsafe injections and other medical and dental procedures) and HIV-positive men who have sex with men (Falade-Nwulia, Sulkowski, Merkow, Latkin and Mehta 2018).

In more than 90 per cent of cases, initial infection with hepatitis C virus does not cause symptoms or only causes mild symptoms. Approximately three quarters of those infected go on to develop a chronic (long-term) infection. Of those who develop a chronic infection, a significant proportion will develop cirrhosis or cancer of the liver, typically decades after initial infection (American Public Health Association 2008).

There is no vaccine currently available to prevent hepatitis C infection.

However, access to harm reduction services (such as needle and syringe exchange programs, opiate replacement therapy, and peer-based support) are proven, effective ways of reducing transmission of hepatitis C, which also have other health benefits for people who inject drugs (Kirby Institute for infection and Immunity in society 2018).

For surveillance purposes hepatitis C is classified as ‘newly acquired’ or ‘unspecified’.

The increase in notification rates of unspecified hepatitis C in Victoria in 2016 may reflect increased testing due to people accessing new, direct‑acting antivirals that can cure hepatitis C in almost all people being treated. (Falade-Nwulia, Sulkowski, Merkow, Latkin and Mehta 2018). 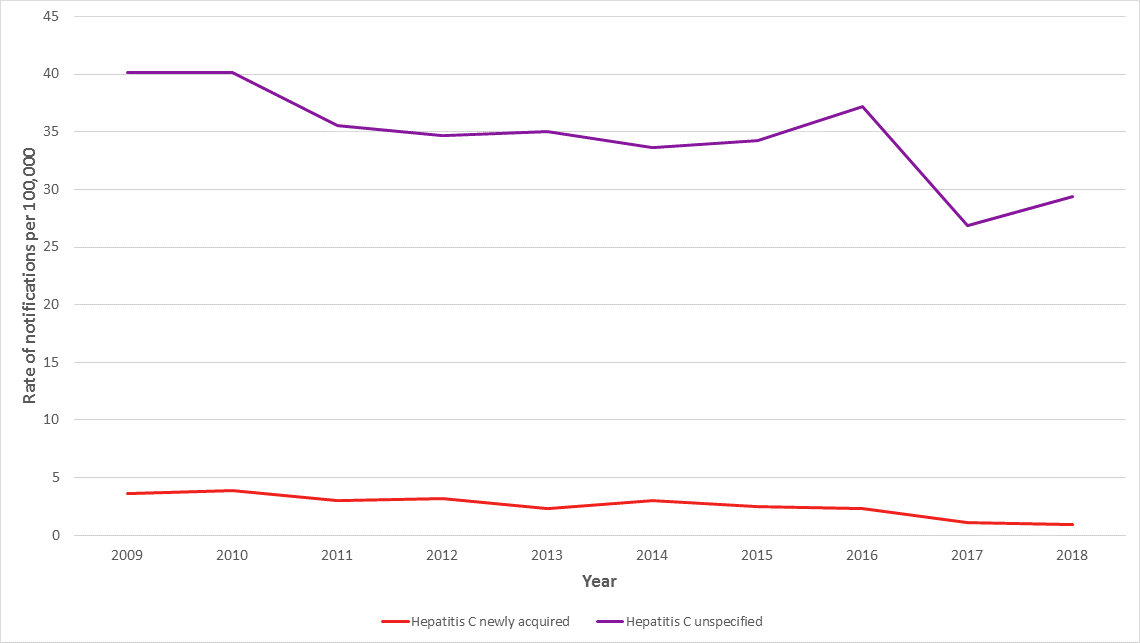 The advent of new direct‑acting antivirals is the most significant advance in clinical management of hepatitis C (Falade-Nwulia, Sulkowski, Merkow, Latkin and Mehta 2018).

Previously, hepatitis C was treated with a combination of injected and oral medications for 6–12 months, which were associated with significant side effects and cured infection in around half of those treated (Friedman and Contente 2010).

The new direct‑acting antivirals are oral tablets, typically administered for 12 weeks with minimal side effects, and lead to cure in around 95 per cent of people treated (Falade-Nwulia, Sulkowski, Merkow, Latkin and Mehta 2018).

Since these became available on the Pharmaceutical Benefits Scheme in March 2016, uptake of treatment for hepatitis C has increased markedly.

In addition to curing hepatitis C, successful treatment reduces inflammation and scarring in the liver and helps prevent the long-term risk of health problems including chronic liver disease and liver cancer.

People are also eligible for re-treatment if they become infected with a new hepatitis C infection or if the initial treatment was not successful. All general practitioners can now prescribe hepatitis C treatments.

Monitoring of hepatitis C treatment uptake data in Australia shows that an estimated 32,550 individuals initiated direct-acting antiviral treatment between in 2016 in Australia, representing 14.3 per cent of the total living with chronic hepatitis C in Australia (Kirby Institute for Infection and Immunity in Society 2017).

During this period, the treatment uptake in Victorians with chronic hepatitis C was 15 per cent, which is above the national average.

This indicates that Victoria is heading in the right direction and has achieved close to a third of Victoria’s 2030 target of 90 per cent of people living with chronic hepatitis C being cured of the disease within the first two years of direct-acting antivirals being available (Department of Health and Human Services 2016a).

International, national and state targets are set out in:

Meeting these targets is a critical part of Victoria’s response to eliminate hepatitis C as a public health threat and eliminate stigma and discrimination associated with the disease by 2030 (Department of Health and Human Services 2016a).

In addition, the Victorian cancer plan 2016–2020 seeks to reduce hepatitis-related cancers as one of its key focus areas (Department of Health and Human Services 2016b).

Realising the potential of the new direct-acting antivirals is an important part of our response to hepatitis C and key to the success of the Victorian hepatitis C strategy.