Buruli ulcer (also known as Bairnsdale ulcer) is an infection of skin and soft tissue caused by the bacterium Mycobacterium ulcerans.

The toxin made by the bacteria attacks fat cells under the skin. This leads to localised redness and swelling or the formation of a nodule (lump) and then an ulcer.

Although Buruli ulcer is not fatal, the infection can often leave people with significant cosmetic deformity and sometimes functional damage to limbs.

In Australia, Buruli ulcer most commonly occurs in localised coastal areas of Victoria. In recent years, Victoria has been experiencing a record number of Buruli ulcer cases (Figure 1) 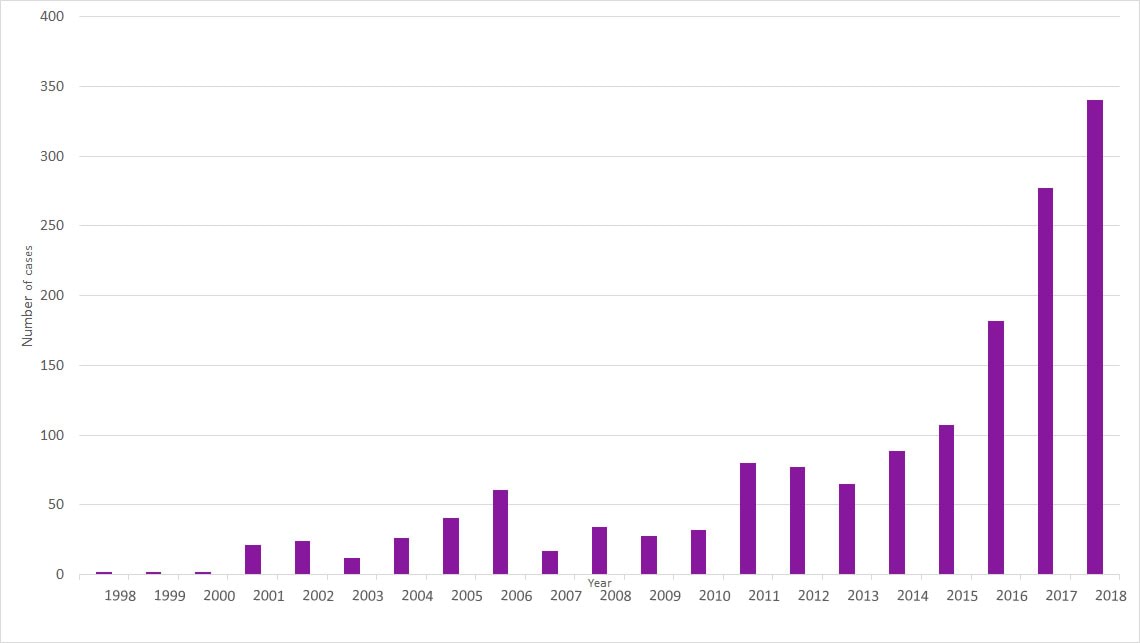 Buruli ulcer was first diagnosed in the Bairnsdale area of East Gippsland in the 1940s and later seen in Phillip Island (Johnson, Veitch, Leslie, Flood and Hayman 1996). Since then, a growing number of cases have been reported on the Bellarine Peninsula (Boyd et al. 2012).

Since 2012, there has been a significant increase in Buruli ulcer on the Mornington Peninsula and the south-eastern bayside suburbs of Melbourne, as shown in Figure 2 (Loftus et al. 2018).

Figure 2: Map of areas affected by Buruli ulcer in Victoria

How Buruli ulcer is transmitted

How Buruli ulcer is transmitted is not fully understood.

The department funded substantial research from 1997 to 2010 that has improved our understanding of how the disease is transmitted, and we now have a test that can rapidly diagnose Buruli ulcer.

In the past few years, the department has also promoted awareness among health practitioners, including developing a learning module for general practitioners.

The department has supported improvements to human and non-human surveillance with genetic sequencing of samples from human cases to better understand the spread of infections.

Ongoing sampling of possum excrement helps to provide insights into the environmental presence of the bacteria in particular regions.

Most recently in 2018, through a substantial National Health and Medical Research grant, the department is a partner in a large research project to investigate how the disease is transmitted and identify effective ways to prevent and reduce infections.

The Beating Buruli in Victoria project

The Beating Buruli in Victoria project was developed in partnership with the Doherty Institute of Infection and Immunity, Barwon Health, Austin Health, CSIRO, Agriculture Victoria, the University of Melbourne and Mornington Peninsula Shire.

The project is being conducted over two years from September 2018 in areas affected by Buruli ulcer in Victoria.

One major area of the project will focus on investigating a range of risk and protective factors associated with Buruli ulcer.

Another major area consists of a mosquito control study that will target specific areas along the Mornington Peninsula.

The findings from the research will inform future policies and programs to halt the rise in Buruli ulcer cases in Victoria.

To find out more, see Beating Buruli in Victoria project.